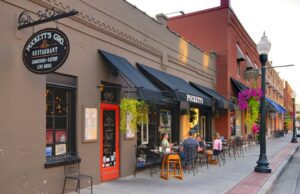 This month, Downtown Franklin Association members gathered to reflect on the year’s progress and to establish goals for 2014.

The annual workshop, held at the Franklin Theatre, produced a list of objectives for the local business owners who make up the organization—ones that will shape its focus in the coming year, says DFA Director Nancy Williams.

Williams says the group spent a sizable portion of the time exploring collaboration and cross-promotion opportunities among members, including extended weekend hours that, in theory, would drive more traffic to shops and restaurants in downtown Franklin after dusk.

“A large part of this organization’s mission is to allow local business to thrive while maintaining desirability and livability,” she said. “Those retail shops who stay open after 5 p.m. are saying they see a viable demand in the market for evening hours on Main Street.”

Bob Roethemeyer, owner of Avec Moi and current DFA president, keeps his doors open later than most on Main Street on the weekends and says he sees the evening hours as an opportunity for growth among members.

“As downtown Franklin continues its vibrancy, we have to expand our vision and be more proactive about capitalizing on the accelerating popularity. This is one avenue to do that,” Roethemeyer said.

The DFA, which was established in 1984, is comprised of businesses located inside the Mack Hatcher Bypass and Leiper’s Fork. Working in partnership with property owners, preservationists, city and county government and local businesses, the non-profit has helped create one of the nation’s greatest Main Street program success stories.

Williams says the recognition is a great reward for the DFA members’ efforts, and an indicator of the organization’s influence.

“Those shout-outs are affirmations for so many people who have worked—and continue to work—to make Franklin what it is today,” she said. “I believe our Main Street program, and our small business owners, are a large part of that success.

“That’s what makes their involvement with this organization, and the community, so valuable.”

Since its founding in 1984, Downtown Franklin Association (DFA) has spearheaded the revitalization of Franklin’s historic downtown core through the four-point program of the National Main Street Center of the National Trust for Historic Preservation: Organization, Design, Promotion and Economic Restructuring.

The DFA works in partnership with its members and the Heritage Foundation of Franklin & Williamson County to protect and preserve the city’s cultural resources.

Together, the two non-profit organizations also organize and promote several festivals and happenings each year.