The 12th Annual Main Street Brew Fest in downtown Franklin is only a few short days away, and lead sponsor Lipman Brothers is once again bringing an incredible array of local, national and international beers to the pre-St. Patrick’s Day festival.

More than 25 different breweries will offer a selection of 75 plus craft beers at tasting sites in and around Franklin’s famous Main Street, which will be closed to vehicular traffic for the event on Saturday, March 14th. The Public Square, Main Street and dozens of local merchants will play host to 26 different tasting locations. To see the Brew Fest Tasting Site menu & map, click the links below: 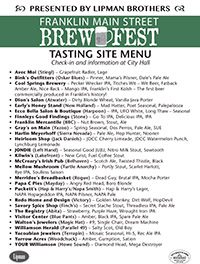 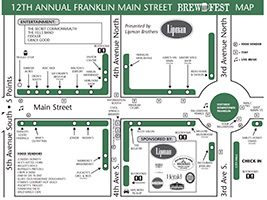 “This event gets better every year, and we’re proud of the lineup we’ve put together for the 12th annual Brew Fest,” said Clark Calvert, general sales manager for Lipman Brothers. “For beer lovers of all ages, this is an opportunity to try new styles from well-known breweries as well as some brands you’ve likely never had a chance to experience.”

Among the highlights are breweries such as Parallel 49 of British Columbia; Atwater of Detroit; Belhaven of Scotland; Blue Pants of Madison, Ala.; Finch’s of Chicago; Stiegl’s of Austria; Lakefront of Milwaukee, Wis.; Oskar Blues of Longmont, Colo.; Rogue of Oregon; Victory of Downingtown, Pa.; and Cool Springs Brewery, Turtle Anarchy and Mayday of middle Tennessee.

And then there’s the food: in addition to presenting sponsor Puckett’s Gro. & Restaurant’s famous trolley, at selection of local food trucks will be strategically stationed throughout the festival, among all the Irish-themed music and green-clad revelers. Shops, restaurants and entertainment venues will be open throughout the historic downtown retail district to cater to the 2,000 plus in attendance.

Kristy Williams, director of the Downtown Franklin Association, says that organizers are focused on a safe and fun street party, which includes sober drivers.

The Franklin Transit Authority is offering round-trip transportation to and from locations inside Franklin city limits for a $6 fee. To reserve a ride, call (615) 628-0263 or email TwilightTODD@TMAgroup.org. The trolley often sells out in advance, as well. In addition, the DFA has secured local company Ride Simply for March 14: call 615-604-0881 or email Virginia at RideSimply@yahoo.com for a safe two-way, flat-rate transit.

The Drury Hotel on McEwen Drive in Franklin is offering special rates as low as $179 that include shuttle service to and from Brew Fest, free cocktails, hors d’oeuvres and Sunday morning breakfast. Call Drury at 800-378-7946, and ask for group #2237441.

Tickets are $45 in advance and typically sell out well before the day of the event. Participants can check in starting at 4 p.m., and the tasting begins promptly at 6 p.m. and will continue until 9 p.m. You must have a ticket to participate in the beer tasting, but not to enjoy the festivities!

See what breweries are participating this year: