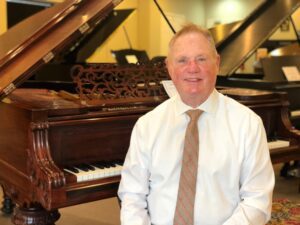 Ron Shuff and his brother had both been band/choir directors and musicians in Atlanta, Georgia. Ron moved to Nashville and later became business partners with his brother in the music business in Atlanta in 1977. He would travel to Atlanta on weekends from Nashville.

In 1978, Ron’s wife Alice suggested Ron bring his business endeavors up from Atlanta to Franklin. Alice would run the business during the day while the kids were at school, and Ron would come in to run it after teaching so that he could pursue songwriting and a career as a professional musician. They bought a fixer upper building (now their store on 3rd Avenue) and moved down to Franklin from Nashville.

Business was off to a rough start, but they were determined to stick with it. Tragically, within the first year of business, they discovered Alice had cancer, and she died nine months later. “We survived largely because the people in Franklin were so giving and supportive,” says Ron. “There were so many good people and many kind acts people did for us. It was the right place to be.”

Business grew as Franklin grew. With the help of The Heritage Foundation, they were able to restore and preserve the exterior of their historic Gaut House location on 3rd Avenue. Eventually, the space on 2nd Avenue North became available, and Ron took advantage of the opportunity to expand – offering music lessons at both locations, selling primarily pianos on 2nd Avenue and other instruments and music on 3rd Avenue North.

“We’ve had some really great teachers. Two of the original hires by my wife are still teaching with us today,” shares Ron. “One of the most rewarding things to be a part of is our community. Part of that is the students and people we have coming in. We’ve had students become very successful commercially. Two kids that finished in the top 10 of America’s Got Talent were our students. We’ve had students take lessons here who became CEO’s of major companies or found success in the record business. The people are the most rewarding part.”