Regional Premiere for the widely anticipated film to serve as fundraiser for nonprofit Theatre.

The Franklin Theatre, in partnership with Shannon Sanders and Cromwell Media, will be hosting a one-night-only premiere screening of Oscar-nominated filmmaker Baz Luhrmann’s biopic “Elvis” on June 22nd. This event will include introductory remarks and a panel discussion before the screening. 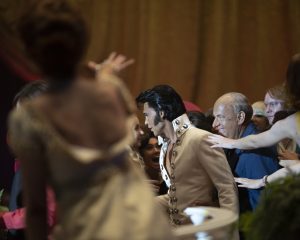 The film explores the life and music of Elvis Presley (played by Austin Butler), seen through the prism of his complicated relationship with his enigmatic manager, Colonel Tom Parker (played by Tom Hanks). The story delves into the complex dynamic between Presley and Parker spanning over 20 years, from Presley’s rise to fame to his unprecedented stardom, against the backdrop of the evolving cultural landscape and loss of innocence in America. Central to that journey is one of the most significant and influential people in Elvis’s life, Priscilla Presley (played by Olivia DeJonge).

“We’re incredibly proud to be chosen by Warner Bros. Pictures to present this historic film at our historic theatre two nights before the national release. Having hosted record releases and Hollywood premieres, like 2004’s Friday Night Lights and 2005’s Elizabethtown, The Franklin Theatre provides the perfect backdrop to this film exploring the life of Elvis Presley,” said Eric Dilts, Managing Director of The Franklin Theatre. “We’ll be using this event as a fundraiser to support our nonprofit Theatre’s operations so that it continues to shine and be the jewel of not just Franklin but for all of Middle Tennessee. The premiere will be a special event for our current supporters, many of which are artists living in the local area.”

Shannon Sanders noted, “I am honored to have played a role in the film, and grateful to Baz and all who worked on the film for their vision. Elvis made so much of his career in Nashville, and there’s no better way to celebrate his legacy and this film than bringing Hollywood to Middle Tennessee.”

The “Elvis” regional premiere Franklin Theatre fundraiser will be Wednesday, June 22 beginning at 6:30 PM. The event will include a reception immediately following the screening.  A limited number of passes will be available to first time and legacy donors to The Franklin Theatre. To learn more about the event or become a donor, please visit https://www.franklintheatre.com/elvis-premiere-info/.

ABOUT THE FRANKLIN THEATRE

Following a complete restoration by the Heritage Foundation of Williamson County in 2011, the historic Franklin Theatre (Est. 1937), re-opened its doors as a state-of-the-art live music venue featuring performances by world-renowned artists.  The theatre also honors its heritage by continuing to show movies. The Theatre’s mission is to provide world-class, diverse performing arts experiences to residents and visitors alike and to be a platform for local philanthropic engagement and education, all delivered with unparalleled guest service. For more information about The Franklin Theatre, visit  www.franklintheatre.com.