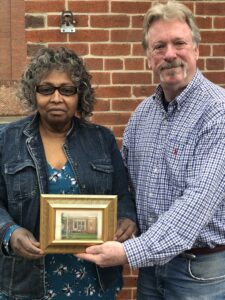 from left to right: Paulette Johnson and Jeff Nichols

Five Points Post Office has served Franklin since 1924. It was the first and only U.S. Post Office for Franklin, TN till 1991.  The main floor was the consumer area for post office functions, and underneath were all office functions. Some of the original chutes going from the top floor and outside to the basement still exist.

The building has served as a post office all these years, as well as a genealogy library, archives, and headquarters for the Heritage Foundation for a time. When archives were stored there, one could find old will books and deeds, along with deeds of enslaved people, in the basement.  These archives were eventually moved across the street into what is now the Williamson County Archives.

The entire building was a post office till 1991, when the United States Post Office moved their facility.  That year, Five Points Post Office was recognized by the National Register of Historic Place as one of the 11 most endangered sites in America, because of the plan to close it. It was purchased by Williamson County in 1992.  They used it for the Heritage Foundation and archives downstairs, as well as a contracted post office. In 2014, First Bank leased and built out their portion of the building after the Heritage Foundation had moved to the Historic Old, Old Jail on 112 Bridge Street. There continues to be a contracted post office in the building next to the bank.

“We would walk to the post office to drop off mail for my mom,” shares Paulette Johnson, resident of Franklin for 68 years and staff member of Five Points Post Office since 2015. “We didn’t pick up many packages, just mostly dropping mail off. The main thing I remember in the early 60s was the first African American mail carriers one day just appeared on our street walking and delivering mail. We were all shocked because Franklin had never had African American postal carriers before. There was an Latham Mills and Alphus Hunter – they were the first two African American postal carriers I’d ever seen.”

There have been three owners of the contracted post office – owned first by Ann Little 1992-2014, then by Tom Otte 2014-2020, then by Franklin resident Jeff Nichols starting in 2020. “One of the reasons I picked up the contract is because I believe in the significance of that building and what it means for the community, and it can never go away,” shares Jeff Nichols.

Five Points Post Office has many P.O. boxes still available to the public, as well as mail drop-off, shipping/receiving packages, and stamps for sale.  When you visit Five Points Post Office, you’re likely to find a friendly bunch of faces in one of Franklin’s most personable community post offices.

“I’m constantly told by people that visit the post office, or that I run into on the street, how near and dear the Five Points Post Office is to them. Many of them talk about walking down to the post office as small children. Their families had P.O. boxes in that building for over 60 years, and it continues to be a hub for downtown Franklin,” says Jeff Nichols. “The little things we do for our customers are above and beyond what you’ll find anywhere else.”